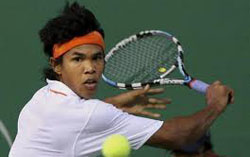 New York: It was curtains for Somdev Devvarman of India at the US Open after he went down bravely to Ruben Ramirez Hidalgo ranked 94th in the first round at the Flushing Meadows here today.

Somdev tanked 473 taking on a much higher ranked player put up a brave fight before going down in the match that lasted for two hours 41 minutes.

However India’s chances still stay alive with the double’s event.

Ace Indian Leander Paes and his Czech partner Radek Stepanek will take on the German pair of Dustin Brown and Christopher Kas in their opening match. The Indo-Czech pair has been seeded fifth in the tournament, whereas Indian duo of Mahesh Bhupathi and Rohan Bopanna are seeded eighth and play Australia’s Matthew Ebden and young Bernard Tomic in their first match.

Tweet
back to top
US Open Leander Paes Mahesh Bhupathi